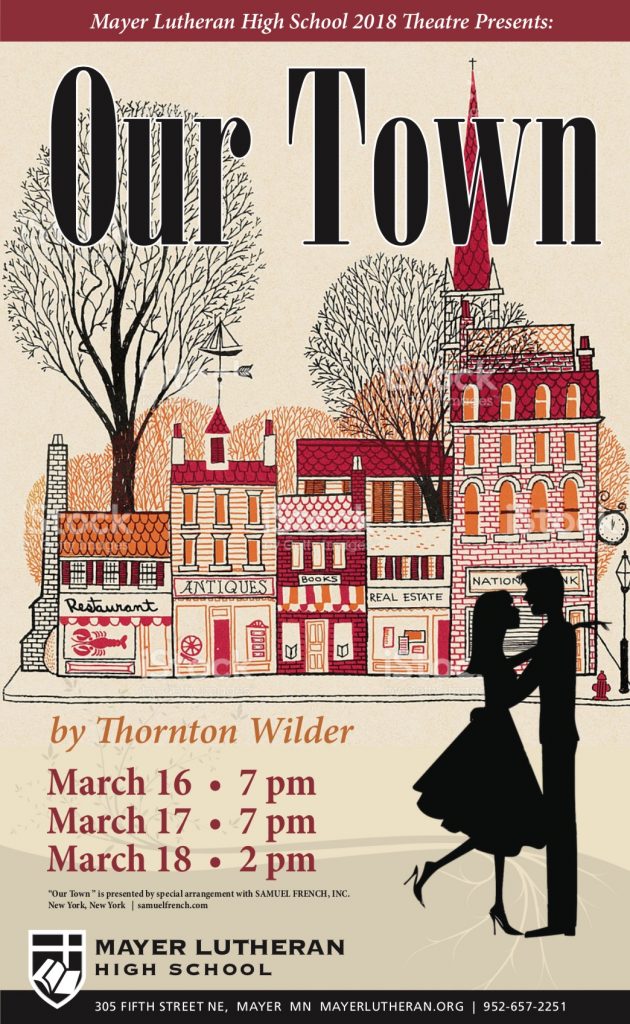 Winner of the 1938 Pulitzer Prize for Drama, Our Town follows the small town of Grover’s Corners through three acts: “Daily Life,” “Love and Marriage,” and “Death and Eternity.” Narrated by a stage manager and performed with minimal props and sets, audiences follow the Webb and Gibbs families as their children fall in love, marry, and eventually – in one of the most famous scenes in American theatre – die.

Praise for Our Town:

“While all of Wilder’s work is intelligent, non-synthetic and often moving, as well as funny, it is Our Town that makes the difference. It is probably the finest play ever written by an American.” – Edward Albee

“Beautiful and remarkable, one of the sagest, warmest and most deeply human scripts to have come out of our theatre […] A spiritual experience.” – New York Post

“No play ever moved me so deeply.” – Alexander Woolcott, The New Yorker

Thornton Wilder (1897-1975), born in Madison, Wisconsin, and educated at Yale and Princeton, was an accomplished novelist and playwright whose works explore the connection between the commonplace and the cosmic dimensions of human experience. The Bridge of San Luis Rey, one of his seven novels, won the Pulitzer Prize in 1928, and his next-to-last novel, The Eighth Day received the National Book Award (1968). Two of his four major plays garnered Pulitzer Prizes, Our Town (1938) and The Skin of Our Teeth (1943). His play, The Matchmaker, ran on Broadway for 486 performances (1955-1957), and was later adapted into the record-breaking musical Hello, Dolly!

Mr. Wilder’s many honors include the Gold Medal for Fiction from the American Academy of Arts and Letters, the Presidential Medal of Freedom, and the National Book Committee’s Medal for Literature. He continues to be read and performed around the world. Our Town is performed at least once each day somewhere in this country, with his other major dramas and shorter plays not far behind.

MLHS is supported by