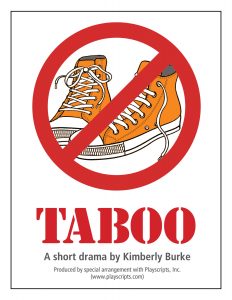 What would it take for you to speak out against those in power who are usurping your freedoms? Why do some people submit to rules they know are unjust? These are questions asked by this year’s MLHS One Act Play, Taboo, by Kimberly Burke.

Hamilton High is just like your high school, only stranger. Syl and Jenny, the new kids on campus, quickly discover it’s a place fraught with unspoken rules—words you can’t say, colors you can’t wear, places you can’t go—and
a powerful student group called the Security Committee that enforces them. But operating just under the radar of the Committee is the Taboo Society, a covert group that questions their unmitigated power. When Syl and Jenny come into conflict with the Security Committee, they must decide where their loyalties lie in this engrossing drama.

Please note that the January issue of the Crusader Newsletter incorrectly listed the conference One Act Play Festival as being held on January 22. The correct date is January 15.